If you’ve got a small bathroom, you’ll know that fitting everything in is next to impossible. Even the most intrepid bathroom designer have to dig deep to overcome a series of profound challenges. First off, there’s providing enough space for the toilet. The people who designed most of our bathrooms seem to have calculated the space we need, down to the exact inch. And it means that making any changes is next to impossible. Then there’s the problem of coordinating the toilet with the sink and the bath. And finally, there’s the problem of figuring out where the heck everything is going to go.

But none of these are challenges that can’t be overcome. Here’s how anybody can make their small bathroom better.

Sinks are a surefire way to disrupt the flow of the room. Pedestal sinks, in particular, can be a waste of space and jut out where you least want them too. One way of making a sink more compact is to build it into the corner of a room. So-called corner sinks are an excellent way of using otherwise unused space. And they often come with cupboards underneath to stow any unsightly items, like toilet bleach.

Use A Shower Curtain Or Sliding Door 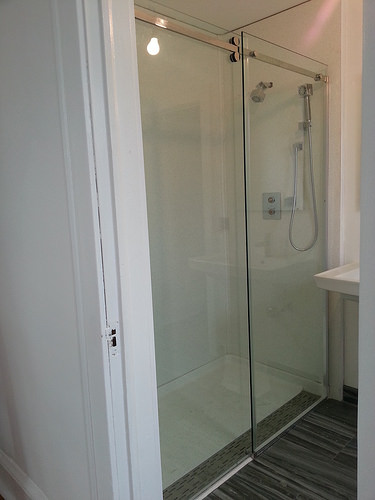 In the 1980s Japan was in the throes of an economic transformation. Millions of people were piling into the cities. And designers had to come up with a way of economizing on space. They came up with the sliding door. But unfortunately, the invention didn’t hit the big time over in the UK and Europe.

Sliding doors, as it turns out, are ideally suited for small bathrooms. They can be used to replace swing out doors on showers. And they can even be used on the door to the bathroom itself. Either way, if you have a small bathroom, a seamless glass shower will give the appearance of the room being larger than it is.  If you don’t want to install a new door, shower curtains are also a great way to save on space.

Invest In A Pod

Bathroom pods are all the rage right now. Essentially, they’re bathrooms that are made in the factory, but that you can install in your home. If you’ve only got a small amount of space, fitting everything you want into a traditional bathroom can be difficult. Pods offer a potential solution. They’ve been refined over multiple iterations. And they’re designed to maximize the use of space.

Put The Towel Bar On The Door

When space is at a premium, finding space for the towel rack can be difficult. Most people resort to one of those cheap towel racks you hook onto the radiator. But even these can obstruct space in claustrophobic bathroom spaces.

The solution? Put the towel bar on the back of the bathroom door.

Many people have narrow bathrooms, especially if the only thing that they house is a toilet. Getting past the sink can, again, be difficult in these situations. So it’s clear that traditional sinks with pedestals need a redesign.